Current versions of Lustre rely on a single active metadata server. Metadata throughput may be a bottleneck for large sites with many thousands of nodes. System architects typically resolve metadata throughput performance issues by deploying the MDS on faster hardware. However, this approach is not a panacea. Today, faster hardware means more cores instead of faster cores, and Lustre has a number SMP scalability issues while running on servers with many CPUs. Scaling across multiple CPU sockets is a real problem: experience has shown in some cases performance regresses when the number of CPU cores is high.

Over the last few years a number of ideas have been developed to enable Lustre to effectively exploit multiple CPUs. The purpose of this project is to take these ideas past the prototype stage and into production. These features will be benchmarked to quantify the scalability improvement of Lustre on a single metadata server. After review, the code will be committed to the Master branch of Lustre.

A CPU partition (CPT) is conceptually similar to the 'cpuset' of Linux. However, in Project Apus, the CPU partition is designed to provide a portable abstract layer that can be conveniently used by kernel threads, unlike the 'cpuset' that is only accessible from userspace. To achieve this a new CPU partition library will be implemented in libcfs.

CPT table is a set of CPTs:

Linux kernel has interfaces for NUMA allocators (kmalloc_node). MDS may be configured with a partition that contains more than one node. To support this case, Project Apus NUMA allocator will be able to spread allocations over different nodes in one partition.

LNet is an async message library. Message completion events are delivered to upper layer via Event Queue (EQ) either by callback or by Polling event. Lustre kernel modules reply on EQ callbacks of LNet to get completion event.

There are two types of buffers for passive messages:

Server side of Lustre service, each service contains these key components:

Allocate an empty CPT-table which with @nparts partitions. Returned CPT table is not ready to use, caller need to setup CPUs in each partition by cfs_cpt_table_set_*().

Create a CPT table with total @nparts partitions, and evenly distribute all online CPUs to each partition.

Create a CPT table based on string pattern @pattern, more details can be found in “Use cases”.

Lock/unlock CPT @index if @index >= 0 and @index < (number of CPTs), otherwise it will exclusively lock/unlock all private-locks in @cpt_lock.

Allocate memory size of @size in partition @cpt of CPT-table @ctab. If partition @cpt covered more than one node, then it will evenly spread the allocation to any of those nodes.

Vmalloc memory size of @size in partition @cpt of CPT table @ctab. Same as above, if partition @cpt covered more than one node, then it will evenly spread the allocation to any of those nodes.

Allocate a page in partition @cpt of CPT table @ctab. If partition @cpt covered more than one node, then it will evenly spread the allocation to any of those nodes.

Change CPU affinity of current thread, migrate it to CPUs in partition @cpt of CPT table @ctab. If @cpt is negative then current thread allow to run on all CPUs in @ctab. If there is only one CPT and it covered all online CPUs, then no affinity is set.

Libcfs will create a global CPT-table (cfs_cpt_table) during module load phase. This CPT-table will be referred by all Lustre modules.

If user is using string pattern to create CP- table, there is no special code path and the CPT table will be created as required.

If user wants to create CPT table with number of partitions as parameter, then the steps are:

Current LNet is protected by a global spinlock LNET_LOCK (Graph-1):

This global spinlock became to a significant performance bottleneck on fat CPU machine. Specific issues with the spinlock include: 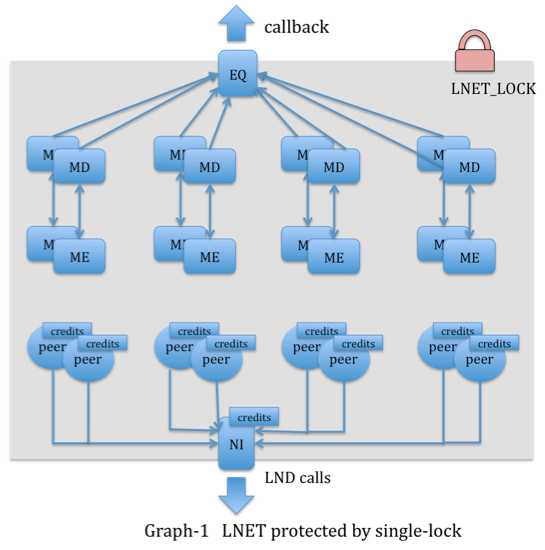 To improve this situation the global LNET_LOCK will be replaced with two percpt-locks (Graph-2):

As described above, EQ callback will be protected by private lock of percpt-lock instead of a global lock:

As described in previous sections:

By default, number of LND threads equals to number of hyper-threads (HTs) on a system. This number is excessive if there are tens or hundreds of cores with HTs but few network interfaces. Such configuration will potentially hurt performance because of lock contentions and unnecessary context switching.

We will set CPT affinity for LND threads by default (bind threads on CPU partition).

By default, these resources will be allocated on all CPTs of global cfs_cpt_table for those most common used services of MDT and OST. However, it is not possible to allocate any number of CPTs to a service in the future (see "Initializer of ptlrpc service" in "Functional specification").

Graph-3 shows partitioned Lustre stack, although we expect all requests will be localized in one partition (Green lines), but it’s still possible that there are some cross-partition request (Red line):

With these cases, LND thread will steal buffers from other partitions and deliver cross-partition requests to service threads. This will degrade performance because inter-CPU data adds unnecessary overhead, but it is expected to be an improvement on the current situation because we can benefit from finer-grain locking in LNet and ptlrpc service. Locking in LNet and ptlrpc is judged to be one of the biggest SMP performance issue in Lustre. 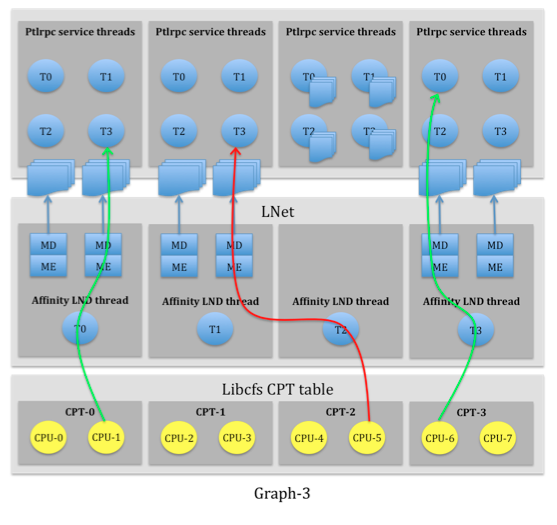 There are other thread-pools which have will benefit from attention. For example, libcfs workitem schedulers (for non-blocking rehash), ptlrpcd, ptlrpc reply handler. Currently, all these thread-pools will create thread for each hyper-thread on the system. This behavior is sub-optimal because HTs are simply logic processors and because threads in different modules could be scheduled simultaneously.

With Project Apus thread numbers will be based on both number of CPU cores and CPU partitions, and decrease overall threads in Lustre.

By default, libcfs will create a global CPT-table (cfs_cpt_table) that can be referred by all other Lustre modules. This CPT table will cover all online CPUs on the system, number of CPTs (NCPT) is:

User also can define CPT-table by these two ways:

Create a CPT-table with specified number of CPTs, all online CPUs will be evenly distributed into CPTs.

If npartitions is set to "1", it will turn off all CPU node affinity features.

By default, LND connections for each NI will be hashed to different CPTs by NID, LND schedulers on different CPTs can process messages for a same NI. However, a user can bind LNet interface on specified CPT with:

The number after colon is CPT index. If user specified this number of a LNet NI, then all connections on that NI will only attached on LND schedulers running on that CPT. This feature could benefit NUMA IO performance in the future.

Providing both @count and @callback at the same time is discouraged. @count is only for LNetEQPoll and enqueue/dequeue for polling will be serialized by a spinlock which can hurt performance. A better mechanism in SMP environments is to set @count to 0 receive events from @callback.

Integrating the LNet Dynamic Config feature and this feature together. This project requires to make some changes to initializing/finalizing process of LNet, which might conflict with another project "LNet Dynamic Config".

We expect this project can help on SMP scalability on all systems (MDS, OSS, clients), but we never benchmarked our prototype for non-MDS systems.

This project adds new tunables to system, and it will not easy to test all code paths in our auto tests.